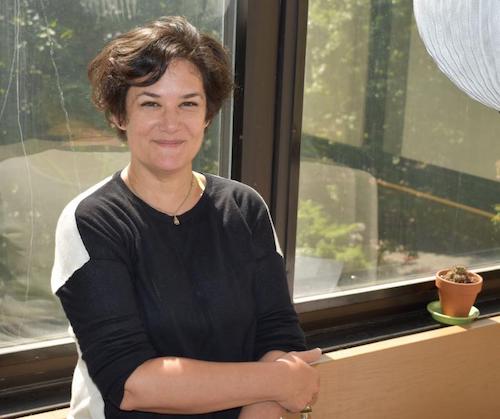 Martha Lewis is a visual artist, curator, educator and radio presenter who has exhibited nationally and internationally. Her practice focuses on drawing, books, knowledge, and the history of science.

One of YQI's mandates is to perform outreach to explain Quantum Information across disciplines, in particular across the humanities-science divide. Initiated by Institute Manager Dr. Florian Carle, we welcomed Martha W Lewis in September 2017, our first ever Artist-in-Residence for a year-long residency.

Scientists can define intangible forces with complex equations, but it’s harder for a general audience, or even scientists outside of the field, to grasp these concepts. Martha’s work as a visual artist might be able to bring a piece of the solution, as art allows her to offer emotions, colors, and volumes to the rules of science. The idea was to make this subject more accessible to people outside of the field and assist a general audience to forming a better understanding of quantum science.

During her residency, Martha interacted with our faculty members and students, attended colloquia and work group meetings, and produced artworks in collaboration with YQI members addressing the complex concepts of quantum physics. Several open-to-all events were held during the residency to showcase her work and work process.

“While scientists have strict guidelines for testing their theories about the universe, artists are free to express ideas without rigorous quantification”, Martha said. “Yet where art and science intersect, is in the use of visual metaphors to represent highly complex or unseen concepts.”

As a traveler visiting a strange land the people here were kind, hospitable, but also a bit wary. The question: “Do we NEED an artist in residence?” hung invisibly in the air, and because most scientists are themselves artists in so many ways, it was hard to succinctly encapsulate the WHY. I have stopped trying to answer it in this way, focusing on the HOW instead. 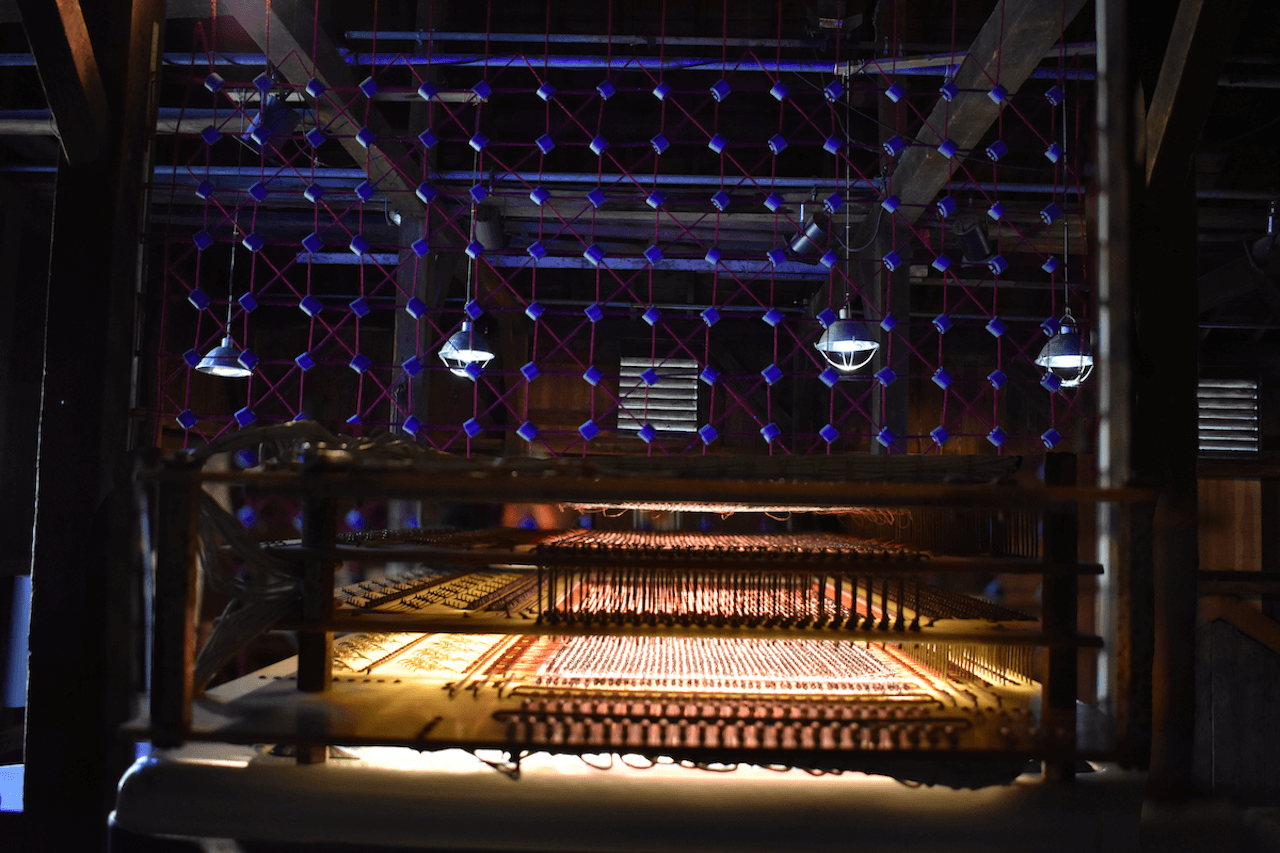 While visiting the quantum laboratories, Martha stumbled upon a computer relic: a dusty piece of magnetic core memory core stored in an old cabinet. The mesh on the memory slices was intricately woven by hand, and the information contained on them is more stable than what we have now in computer hard drives.

Remembering Memory, the installation created in the historic Eli Whitney Barn for City Wide Open Studios on October 21-22, 2017, dove into the history of computing, and of the “memory slices” that once made up the core memories of the room-size supercomputers that ushered in the information age.

The fragility and permanence of memory — what and how much we remember, what and how much we forget, and what we can recall — were foremost in Martha’s mind as she contemplated her barn piece. “I wanted a Zen garden where you think about memory,” she said. She considered her own memory, a tricky thing. “I think of my unconscious memory as pretty smart, and my conscious memory as pretty stupid.” With all that we forget, all that we lose, was it possible to capture some of it in art?

While a bit rough around the edges, Remembering Memory offered a glimpse of what I was up to at YQI and gave me the perfect test site for a multi-facetted work that involved- in addition to the object and its technology- the history of women’s hand-labor, a meditation on the interrelationship between our own minds structure and the “memory” functions of the devices we make, science fiction, cinema and the metaphor of mind as a location (palace, garden or library) as well as and the impermanent state of our own brains. 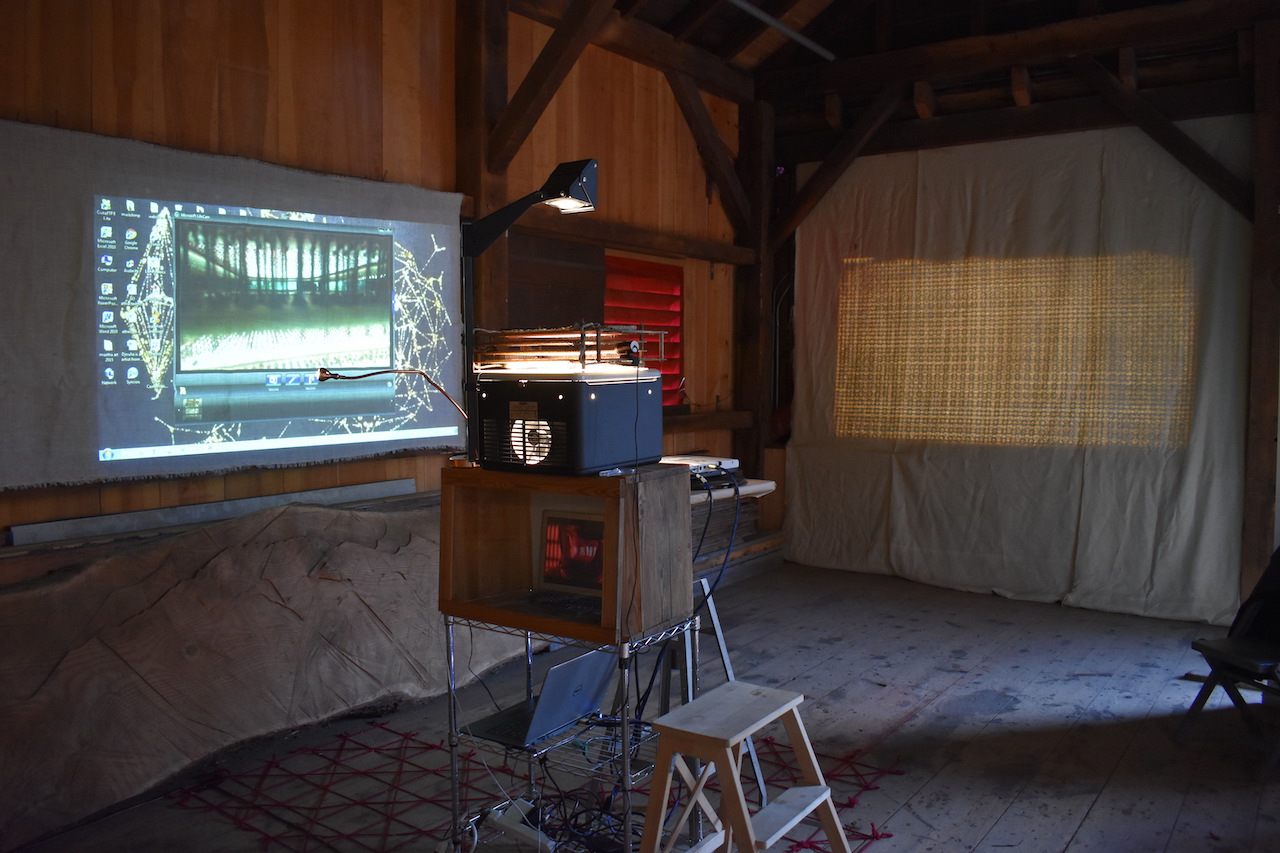 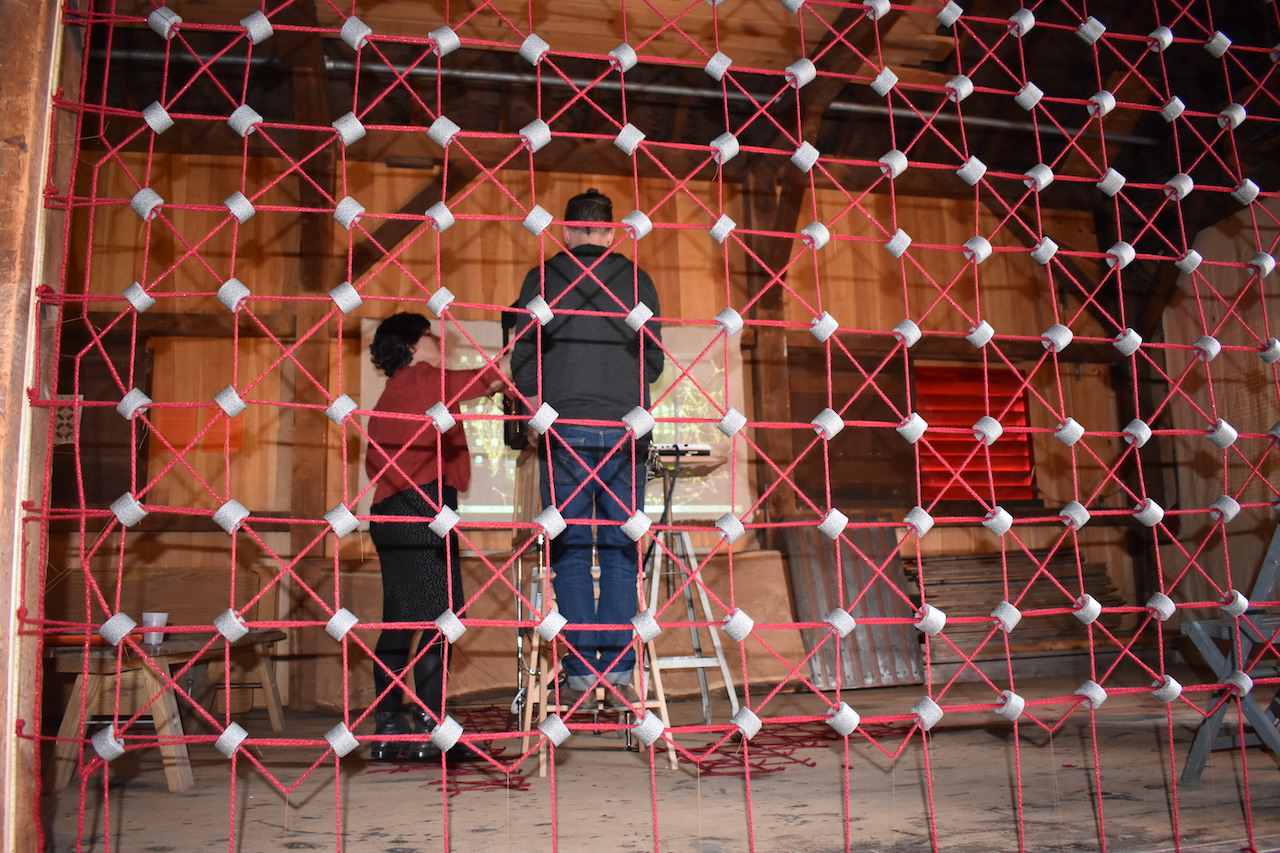 Looking at the lattice that Martha had woven at the threeshold of her installation, which allowed viewers to look through it to fellow artists’ works beyond, and all the people coming and going on this warm fall day, it was possible to see that Lewis had expanded the idea she had come across from the first age of computing. She had made the entire barn, and everyone in it, into a memory slice. Even if the barn itself wouldn’t remember the weekend later, perhaps some of the people passing through it would.

See more photos of Remembering Memory in the gallery 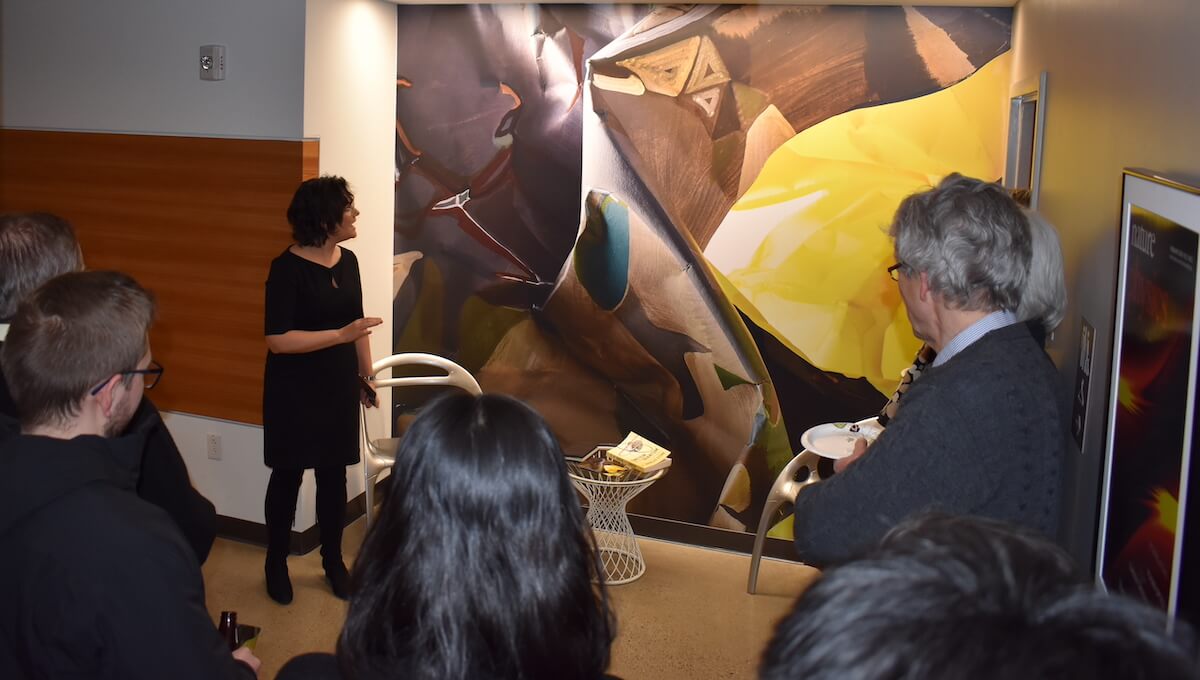 When you enter YQI, you are greeting by a colorful mural: . This piece is a metaphoric representation of the quantum-mechanical vacuum, in which every field undergoes random vibrations around its null value, on all scales of space and time.

How the artwork manifested only came into being after having interacted with those at YQI. The mural is far more collaborative in nature than what I habitually produce, offering a sea-change from my usual solitary studio practice, much more in keeping with the collective methodology in operation at the institute. I had input as to the ramifications of the visual elements in process, I had skilled technical support, I had remote fabrication of the final work, all new experiences. I was -unusual for me- uneasy up until the installer finished his last burnishing stroke and we saw it in situ, shining in the light of the lobby, a reflected glow shimmering along the floor. Without risk nothing creatively special really ever happens, and I wanted to give the institute something special. 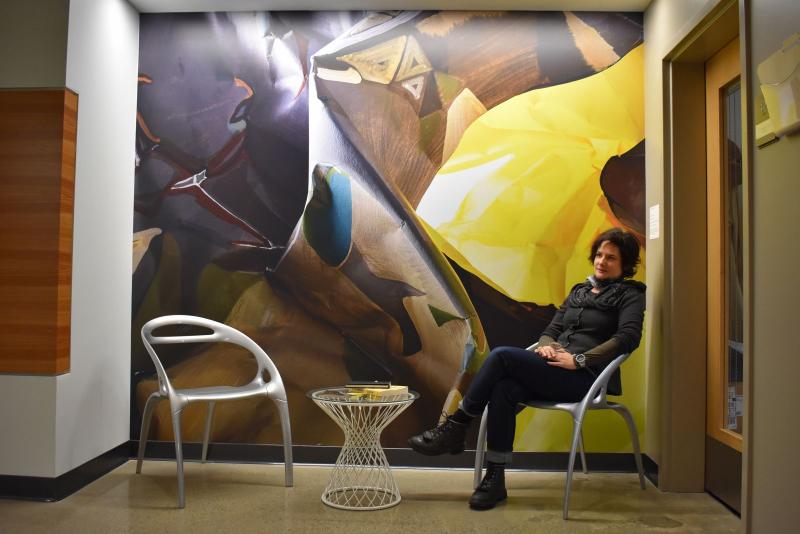 The artwork is a part of Martha’s series of ‘Branes, (membranes) made of ink and gouache on crumpled paper, then photographically rendered and digitally printed on vinyl. Photo by Luke Hanscom/Lotta Studios.

I'll be your qubit!

I’ll be your qubit! was Martha Willette Lewis’ YQI final residency project in conjunction with the 2018 International Festival of Arts and Ideas. Each June, New Haven hosts the festival which brings together the world’s performing artists and thought leaders. We collaborated with the festival to present I’ll be your qubit! The entanglement of quantum physics and art which was composed of a panel talk and an art installation which was on viewing at YQI trhoughout all the festival.

Interview on WPKN Radio Something about the origins of I’ll be your qubit!
Quantum Physicist Michel Devoret, Visual Artist Martha W. Lewis, and YQI Institute Manager, Florian Carle investigated the relationships between art and science, discussed their collaboration, and the benefits of engaging in multidisciplinary activities during the Idea panel talk.

From the beginning I have been fielding expressions of curiosity from the general public about YQI, about my projects. One of my functions is as a kind of visual translator, hopefully making what goes on at the institute a bit more tangible. The irony is that with things quantum “tangible” is a tall order, but this is what I do, I take ideas and model them into layered, nuanced, palpable things….

The panel talk was followed by a guided tour of I’ll be your qubit!, which was an interactive, immersive installation where the viewer was implicated in the experience. Referencing optical toys, early cinema and drawing on her experiences over the year at the Institute, Martha W Lewis has created, in partnership with professor Michel Devoret, YQI researcher Stefan Krastanov (who provided the technical wizardry for the installation), and Institute Manager Dr. Florian Carle, a special quantum diagram one could move through, turning the interior space of the institute into an oversized quantum experiment. In addition to the installation, her drawings of the dilution fridges, as well as pictures of her other art installations during the residency were on display.

Enter the artistic fridge! I’ll be your qubit is a representation of the cylindric cryofridges used in our laboratories to perform typical quantum information experiments.

All the senses of the visitors are engaged during the visit. Thaumatropes, optical toys popular in the 19th century, were given to each visitor to represent their quantum state. While it is physically impossible to see both side of the toy at the same time (as it would be impossible for a cat to be both dead and alive!), the quantum world allows such superpositions of states. By spinning the thaumatropes between ones fingers, the two sides start to appear at once to the visitors and represent visitor quantum excitement inside the fridge.

Visitors were also offered colorful and mysterious ice-cubes to cool down them down upon entering the fridge. Each ice-cube had two distinct flavors, slowly diffusing in the visitors mouth asthey toured the installation, reinforcing the superposition of their state.

The installation reacted to the visitors as they approached and let them interact with its colored light sensors, spinning flipbooks, and quantum timestamps with changing messages.

One of the 9 flipbooks the visitors interacted with. The flipbooks behave randomly until a visitor triggers the motion sensor (observer effect).

The installation featured two basic quantum mechanics phenomena, the observer effect and the interference effect. The quantum observer effect corresponds to the act of measurement fundamentally perturbing the system under study. This effect manifested itself as the visitor/observer entered the enclosure of the experiment, modifying by their very presence, the state of the installation.

The quantum interference effect is visible here through the colors of the diagram, where in which two incompatible possibilities are realized at once. Around each triangle, there is an even/odd number of red/blue corners. Just as one quantum particle can pass through two slits simultaneously, the color assignments of the diagram evolve as if they satisfy two incompatible patterns. Learn more about the science behind the installation on Stefan Krastanov’s blog.

The team behind I’ll be your qubit! having their portraits taken by the motion sensor camera at the center of the installation and from the side

Installation of the permanent mural at YQI

How to better understand and use colors talk: "What's the matter with colors?"

Installation of I’ll be your qubit!

Preview showing for YQI members of I’ll be your qubit!

Arts & Ideas Festival - I’ll be your qubit! The entanglement of quantum physics and art - Panel discussion

I’ll be your qubit! The final tour

Deinstalling of I’ll be your qubit! 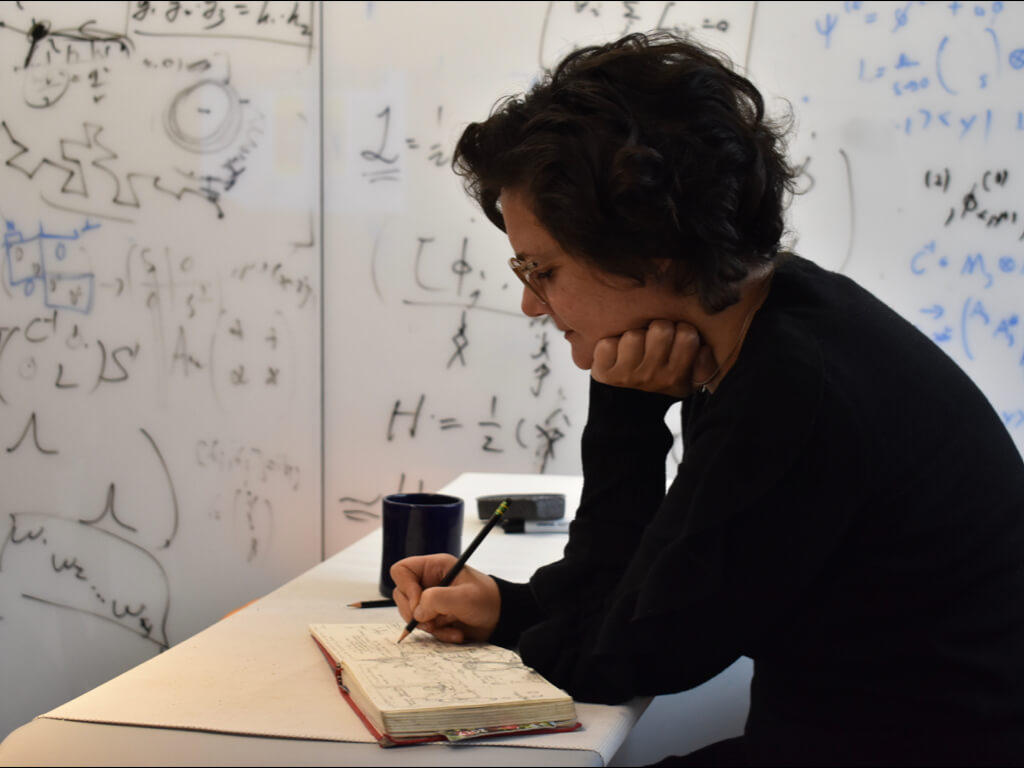 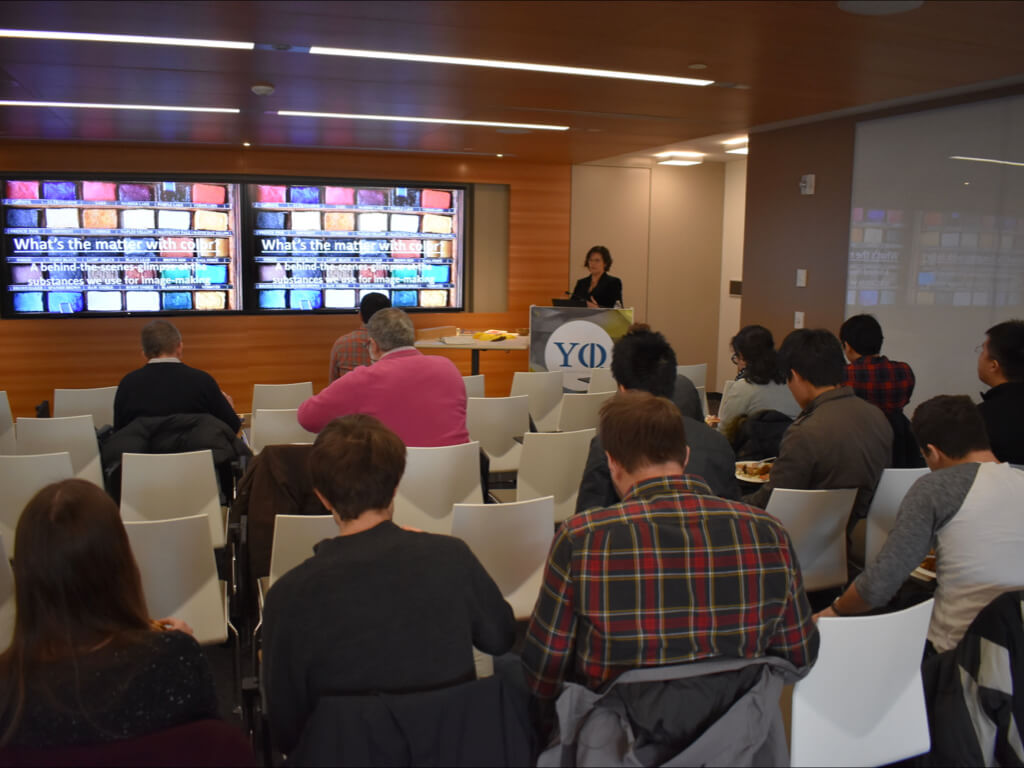 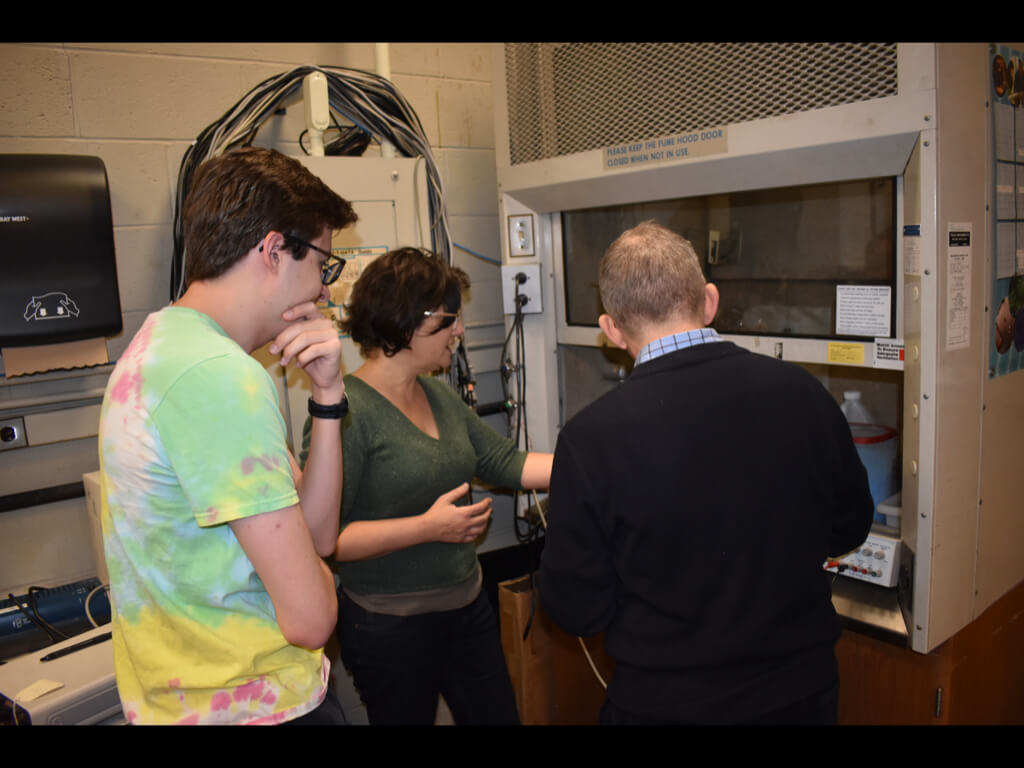 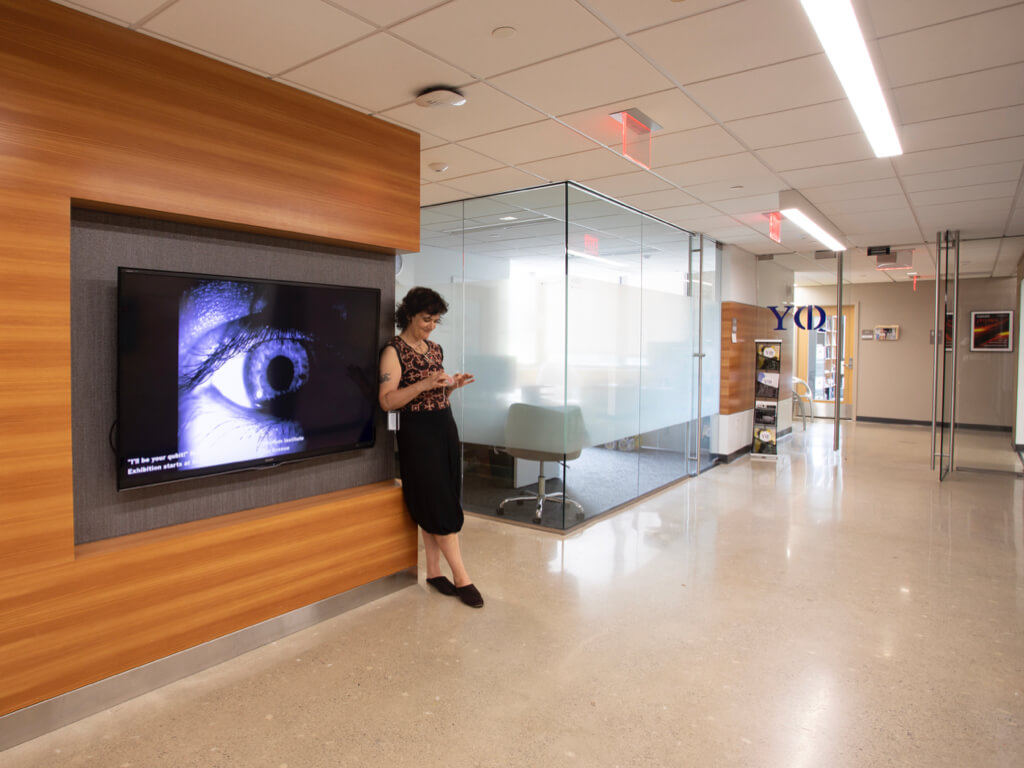 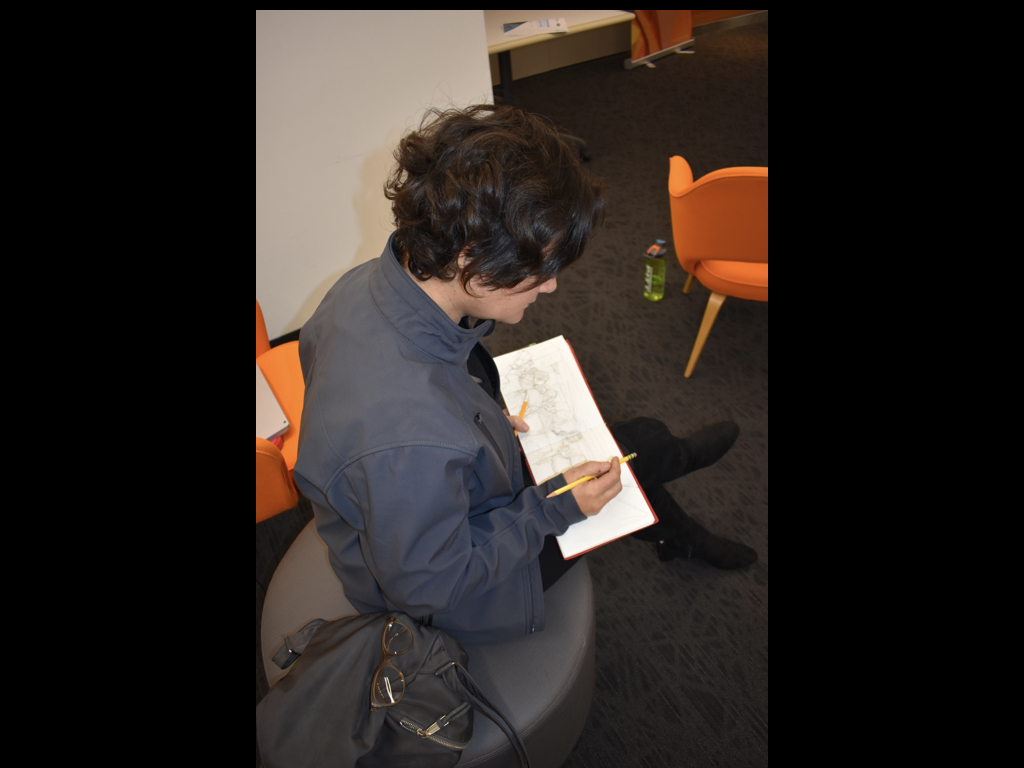 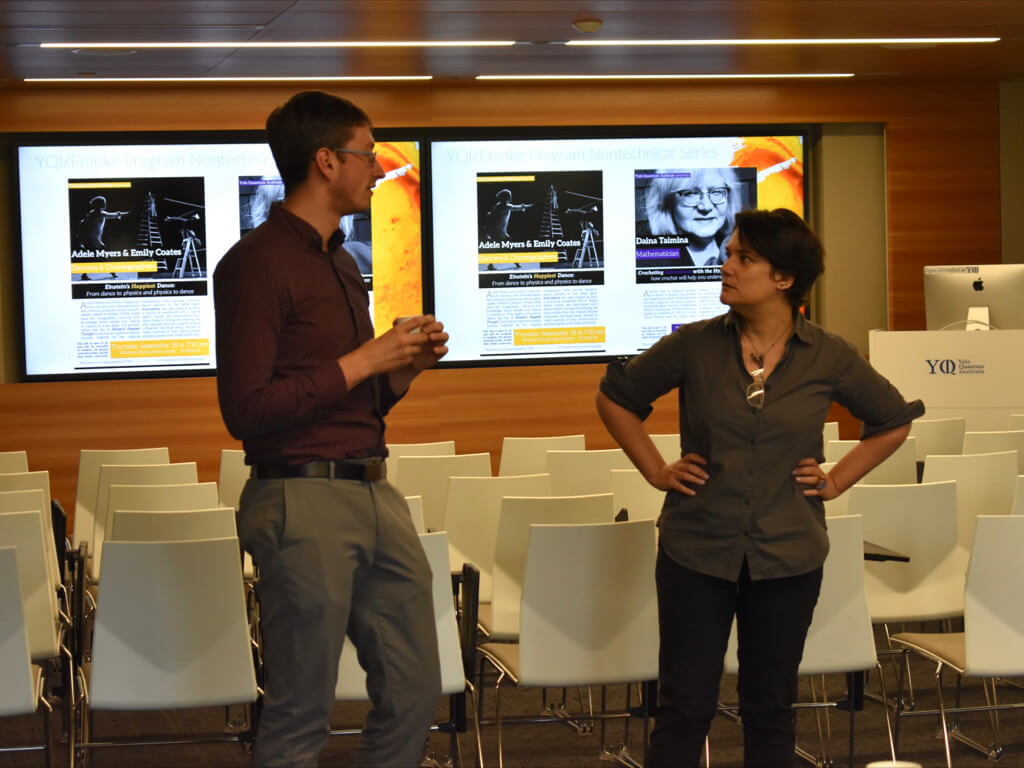 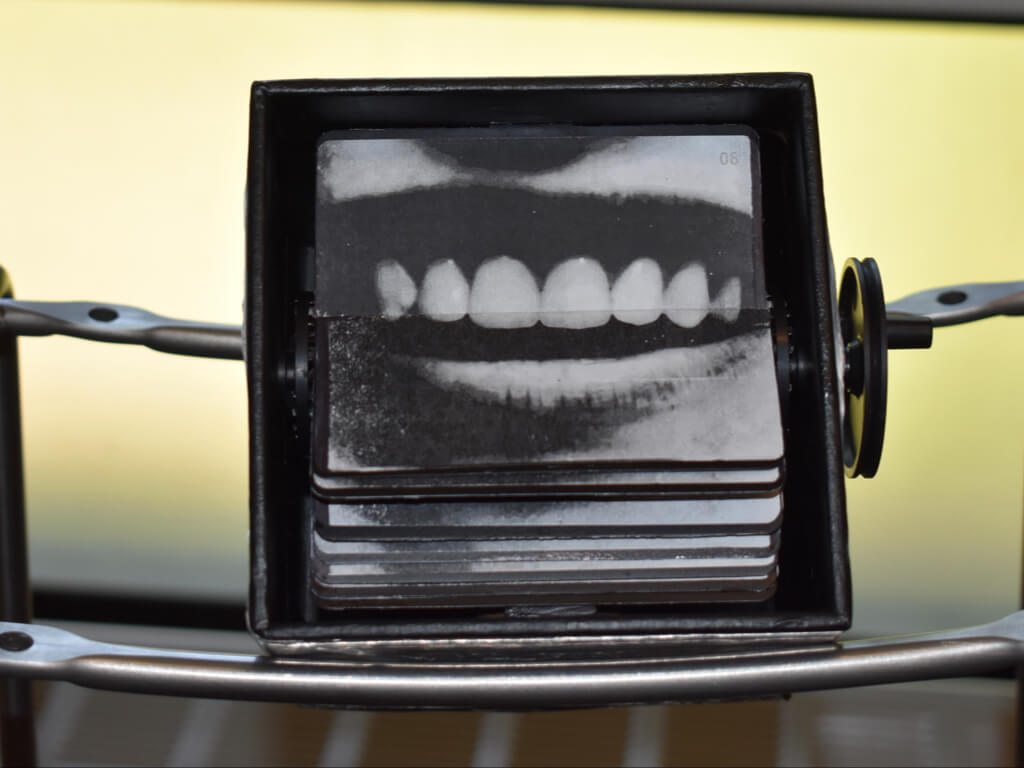 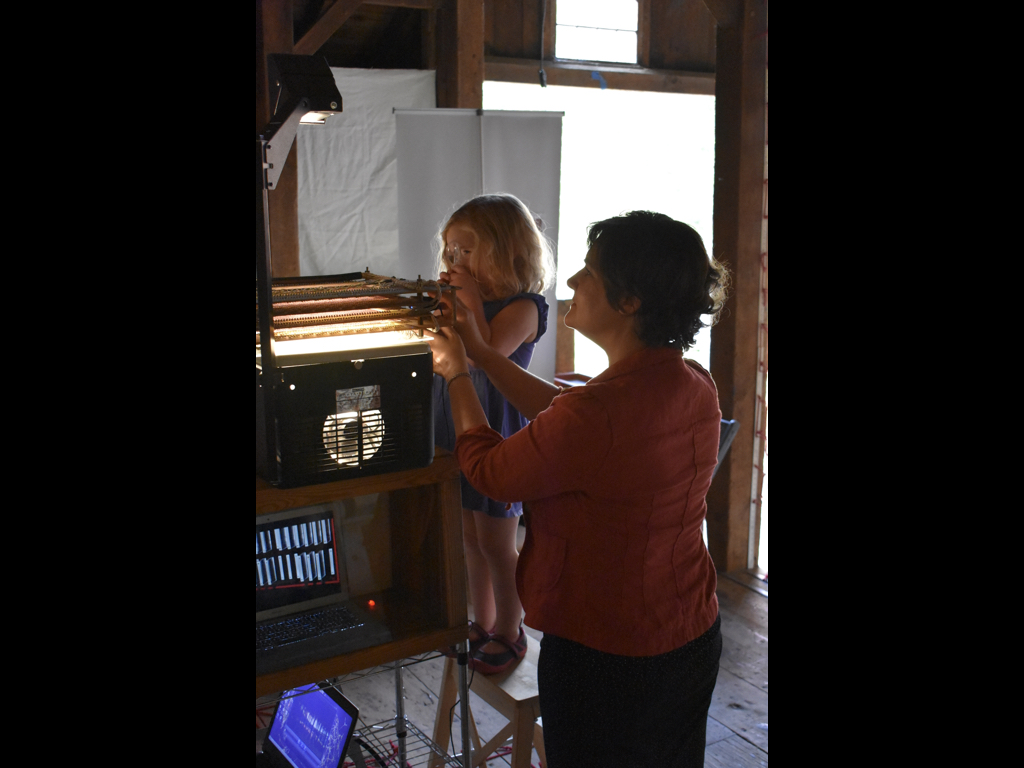 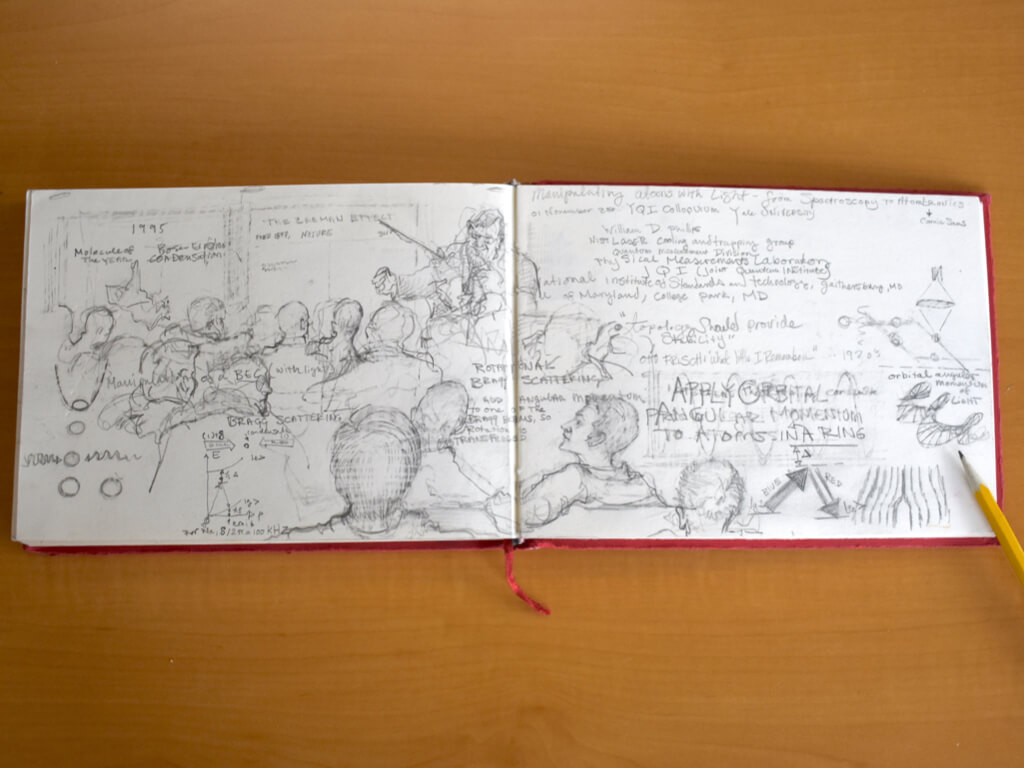 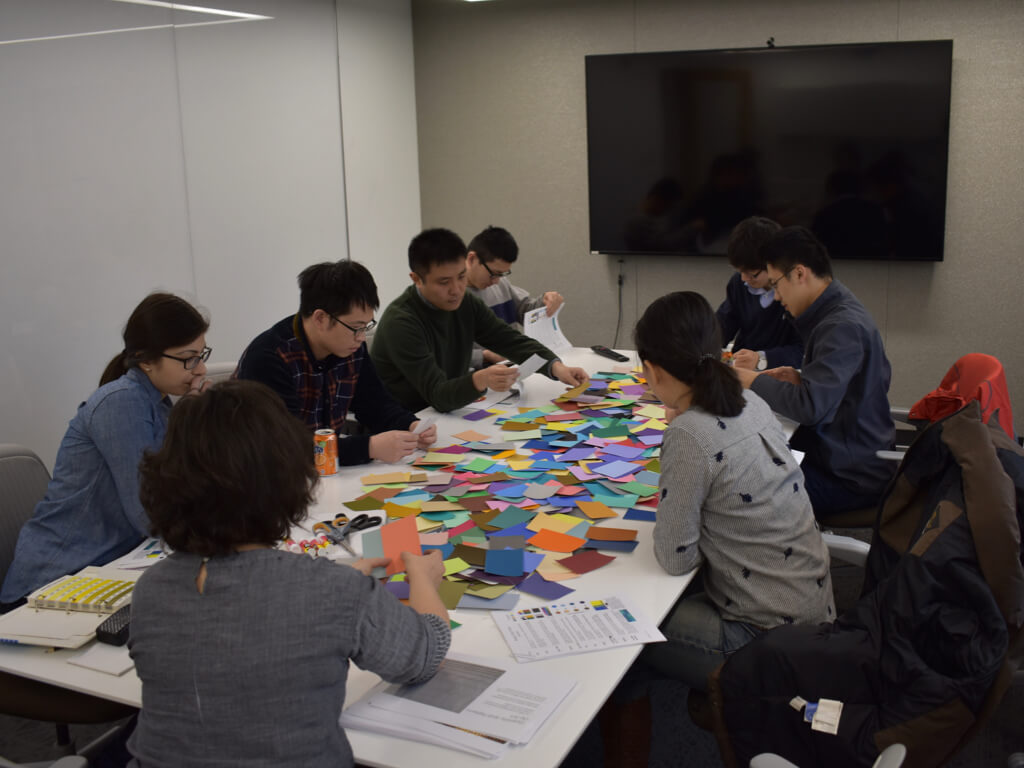 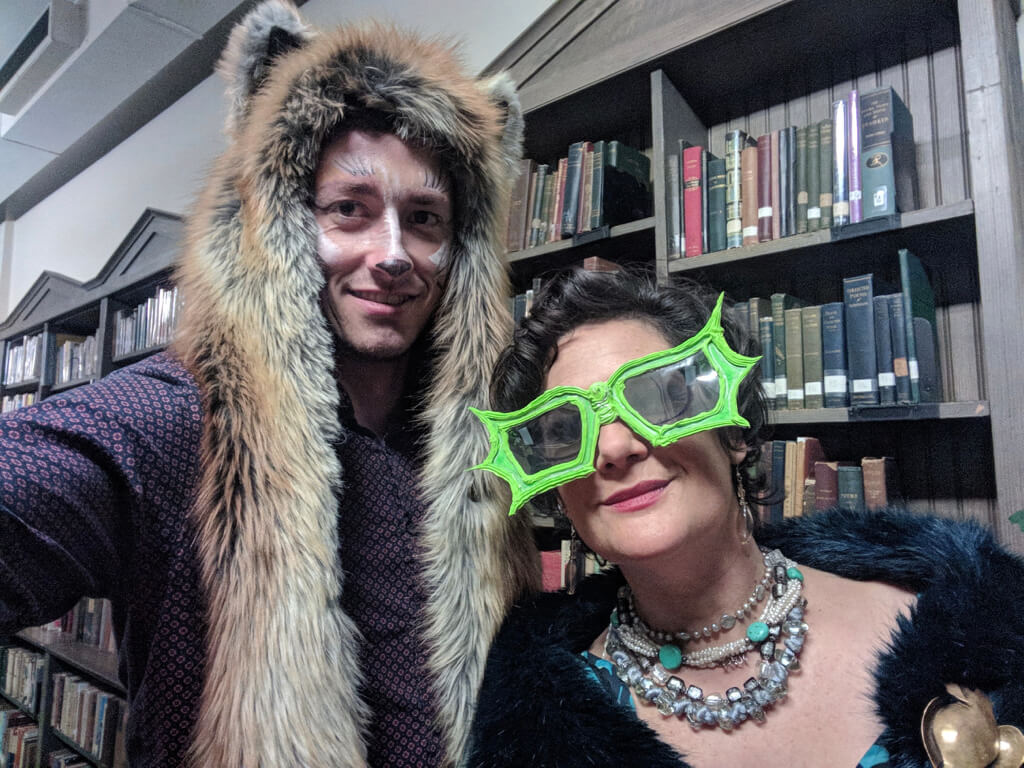 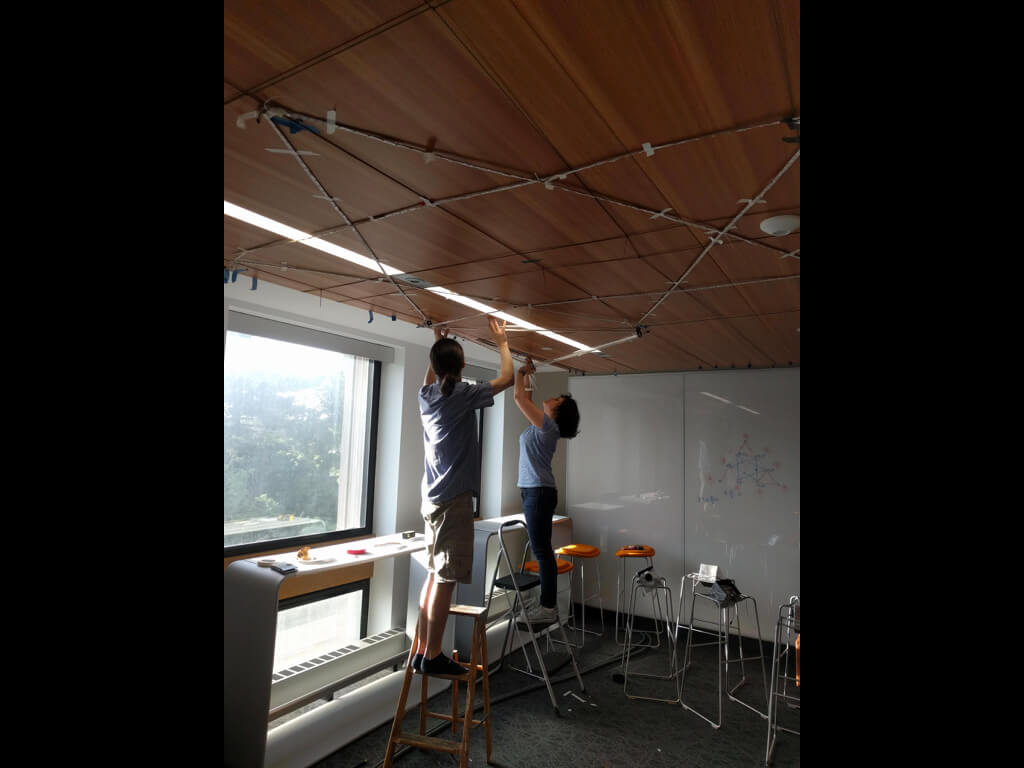 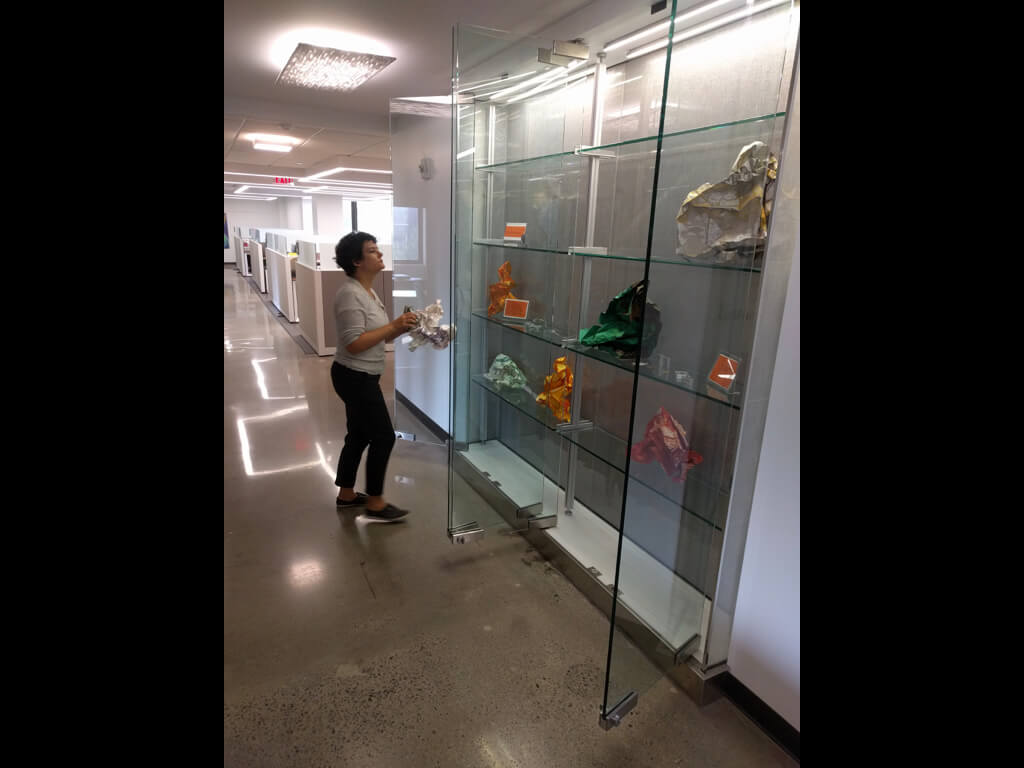 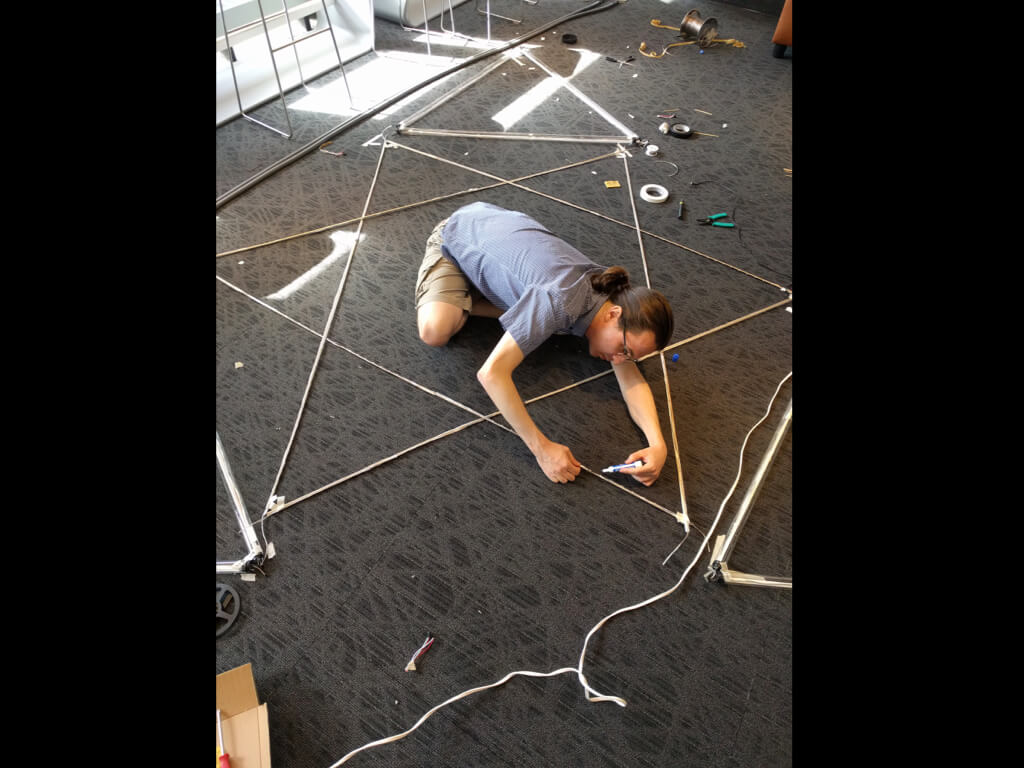 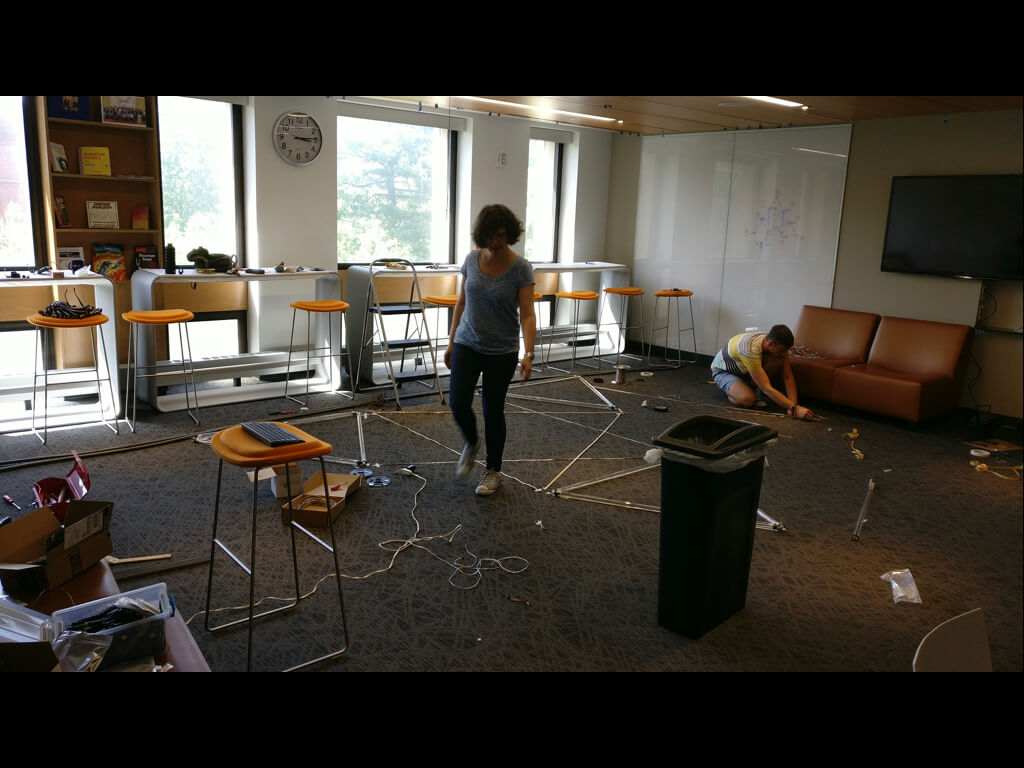 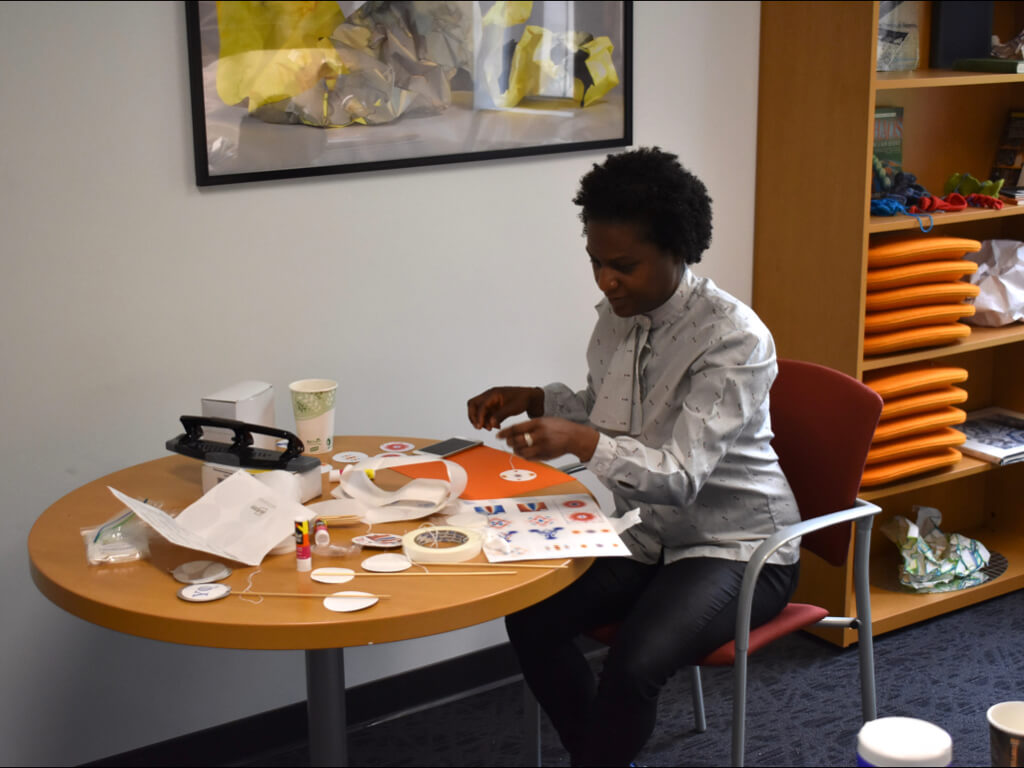 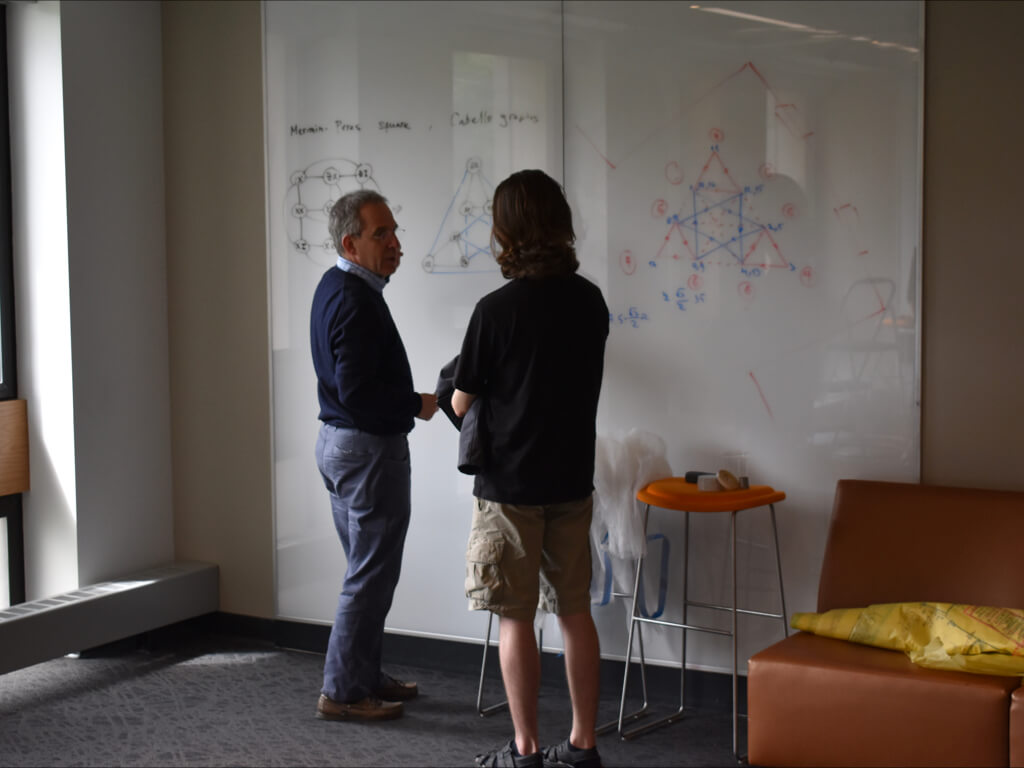 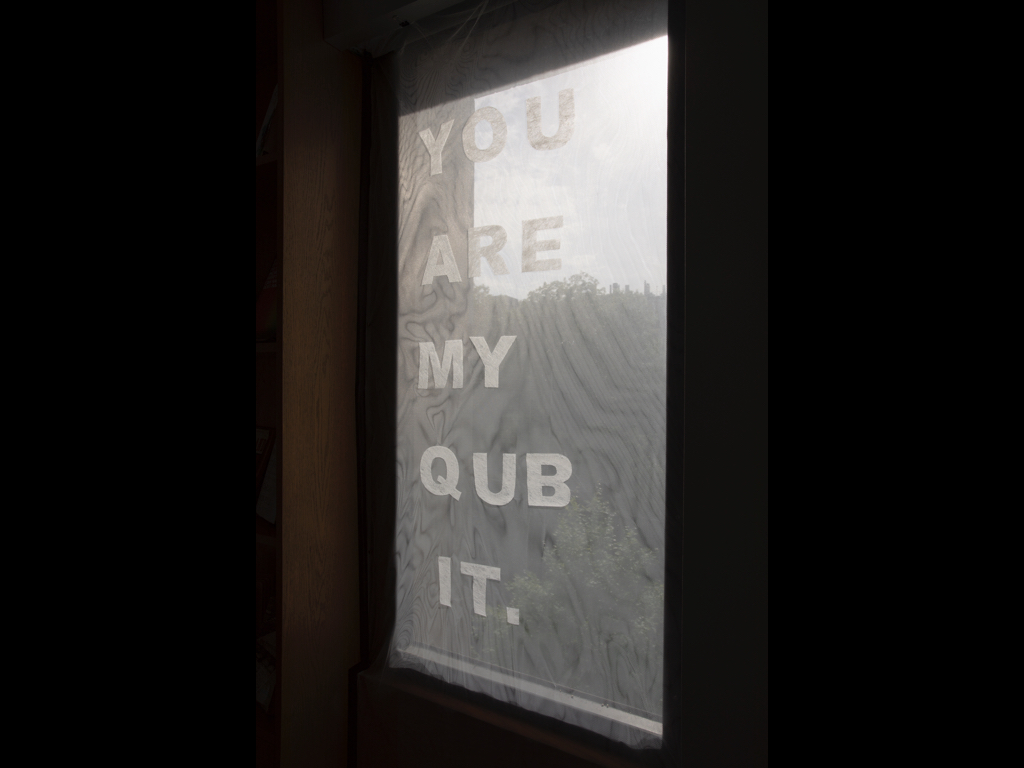 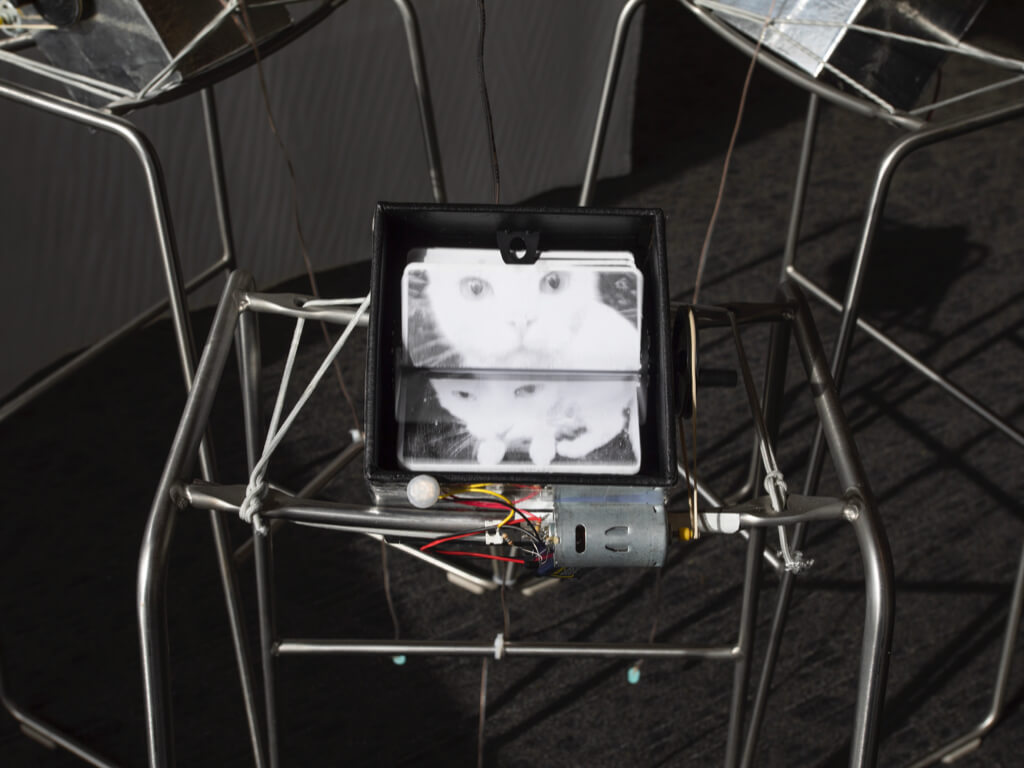 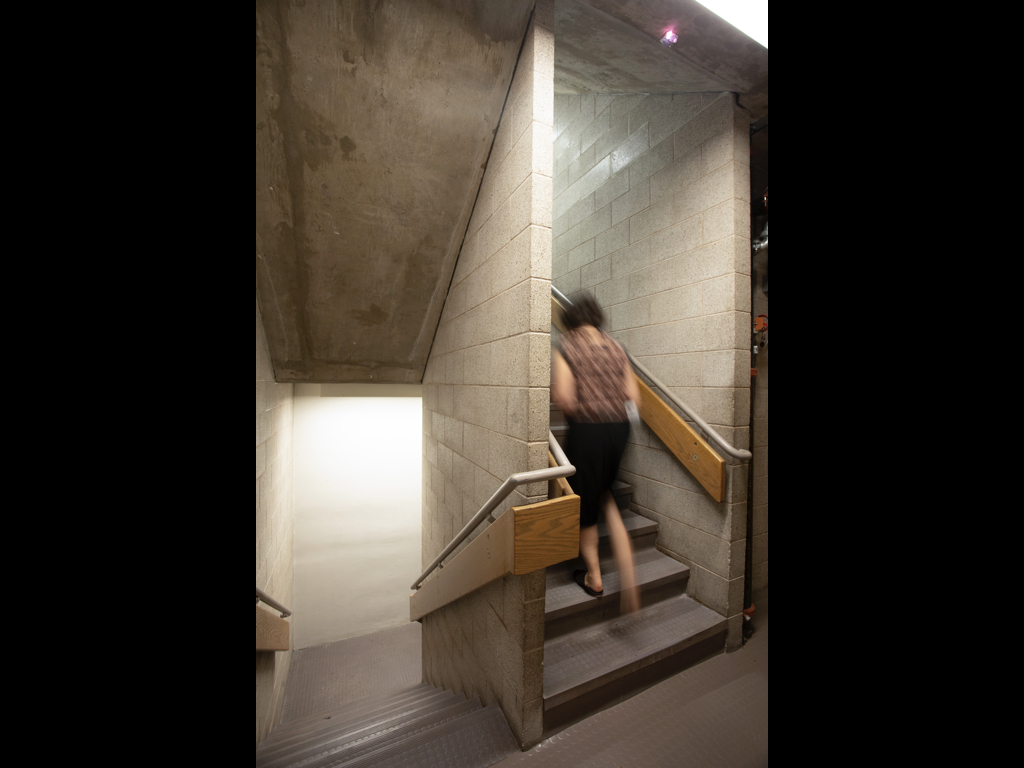 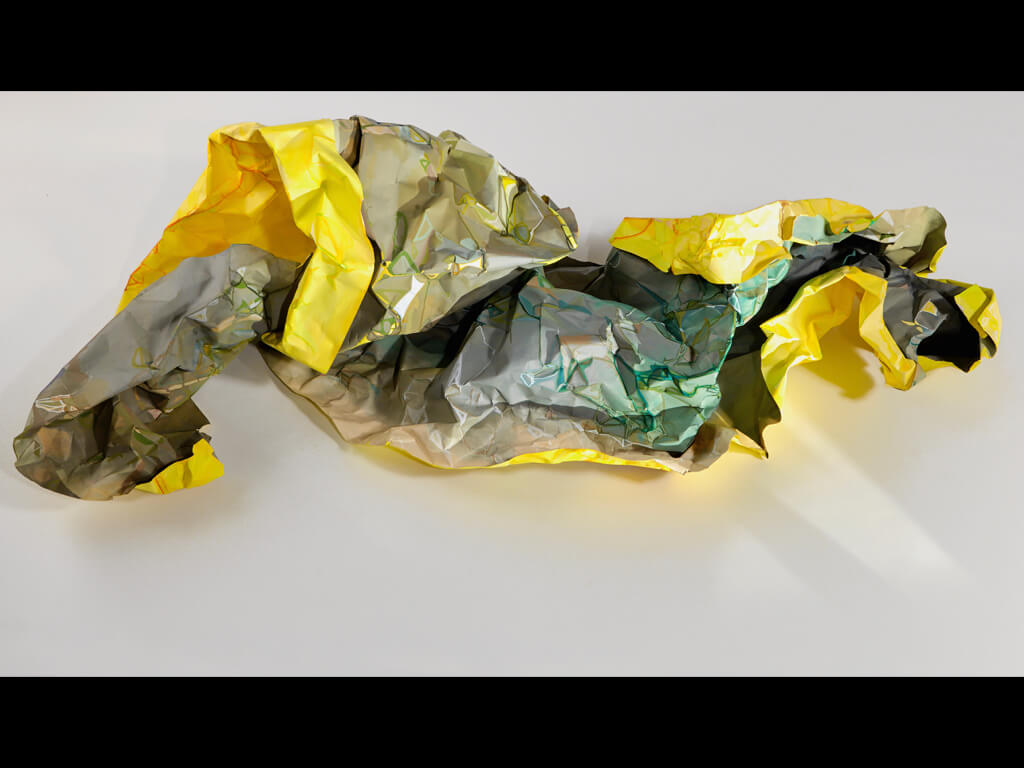